If you’re travelling to Europe in early 2017, here’s a few ideas of things to do in London in spring.

Take a spring time walk in a London park

There are quite a few London parks that deserve a visit and filled with flowers that can really lift your spirits after a long, grey winter. They are all located close to other major attractions so you don’t need to take much time out of your schedule to find them. One of the easiest ones to fit in to your itinerary is St James’s Park in central London. It’s just a stone’s throw from Buckingham Palace and Westminster Abbey so you can combine a walk through the park with a visit to one of these. Also close by are Churchill’s War Rooms, one of London’s best kept secrets when it comes to museums. 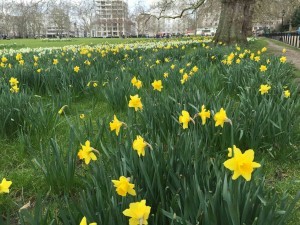 Even though you may not be in Ireland, you can still celebrate St Paddy’s Day in a big way. St Patrick’s Day, March 17 this year falls on a Friday so celebrations will be going on all weekend in London finishing with a big parade on Sunday March 19, 2017 that ends in Trafalgar Square.  So if you are in London around this time you can easily celebrate the day with Londoners. No shortage of Irish pubs and bars around town if you want to down a Guinness on the way. 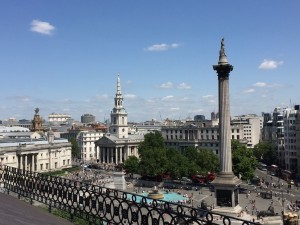 Visit a London gallery or museum for new spring exhibitions

If the weather isn’t allowing you outside then February 2017 in London sees the opening of several major art exhibits that will be worth tracking down. An exhibition at Tate Britain gathers together an extensive selection of David Hockney’s most famous works. The exhibition runs from February 9 – May 29, 2017. The Royal Academy is showing Revolution: Russian Art 1917-32. It’s now 100 years since the revolution of 2017 and this show examines this momentous period in Russian history through the artwork of the time. And on March 9 The British Museum opens The American Dream: Pop to the Present. The exhibition traces American’s recent history through the eyes of American artists. It draws on it’s outstanding collection of modern and American prints with other works from museums and private collections around the world. Combine this with a British Museum Highlight tour and make the most of your visit to this outstanding collection. 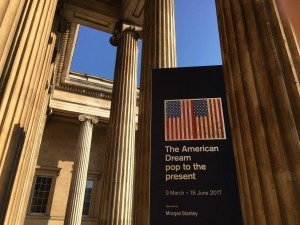 ‘The American Dream’ showing at the British Museum

A new exhibit at Kensington Palace this year focuses on Diana, Princess of Wales, in a celebration of her life. Diana made her first public appearances in 1981 and it’s been 20 years since her death in Paris. The exhibition shows how Diana’s style developed over the years.  It also includes some of her best-known pieces including a pink blouse photographed by Lord Snowdon at the official engagement portrait in 1981. And the long blue evening gown that she wore at the White House as she danced with John Travolta.

Kensington Palace and a new exhibit about Diana’s fashion

Hot tickets for theatre and shows

Theatre is one of the top things to do in London at any time of year. London has it’s fair share of musical blockbusters including Les Miserables and the Phantom of the Opera. Alongside these are you can find School of Rock and the award winning Stomp. Get here before February 18 and you could get a chance to see American actor Ed Harris starring in Sam Shepherd’s play Buried Child.He plays alongside his real-life wife Amy Madigan. And there are still opportunities to get tickets for the latest Harry Potter phenomenon Harry Potter and the Cursed Child in the West End. 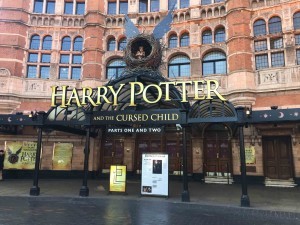 ‘Harry Potter and the Cursed Child’ still showing in London

Experience of one of many London’s markets

As the weather begins to get warmer visit one of London’s markets to be outside and experience of local culture. Popular markets are Portobello Road for antiques and bric-a-brac on a Saturday. And whilst you are there check out the filming locations used in ‘Four Weddings and a Funeral’. For foodies head to Borough Market. On Wednesday-Saturday it is at it’s best. Stalls loaded up with fresh produce every day to buy. Or you can get a huge variety of food on the go from the many street stalls close to London Bridge. Borough Market is also next door the Shard currently Europe’s tallest building at over 1000 feet high. So if you have a head for heights you can take one of the 44 elevators to the 72nd floor for breathtaking views over London. 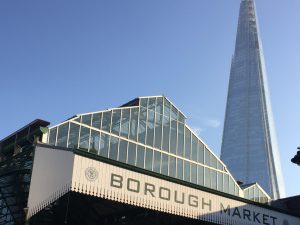 Borough Market and its next door neighbour The Shard

If you need help with planning any of your activities or want to maximise your time in London to the full then email me to book a private tour and make the most of London in spring time.

This site uses Akismet to reduce spam. Learn how your comment data is processed.