London hosted the Olympics in 2012 and the site that was created for the event has left a legacy that is changing the face of East London. On a Park walk we’ll see incredible Olympic architecture the elegant Aquatics Centre, the stunning velodrome and cycle park and the Olympic Stadium itself. We can also walk through the new formal and informal landscape gardens and hear about how the Park and it’s legacy is changing the face of east London. 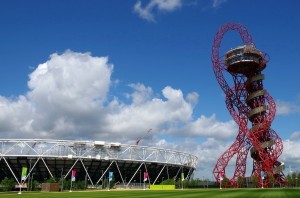 On a Park walk we can see the iconic architecture of the Aquatics Centre and the Velodrome and perhaps even ride the elevator to the top of Sir Anish Kapoor’s Orbit. As well as the architecture the Park has nearly 30 public artworks that we can find on our route. Many of the artworks are a result of projects which involved local people and their personal experiences.

Sport and leisure, flora and fauna

The Park is open for business. We can see the venues that hosted the 2012 Summer Olympics where athletes gathered win medals. There are also open spaces to enjoy with beautiful planting schemes and colourful displays of flowers set within the backdrop of the unforgettable architecture. Learn how the planting displays and garden areas were planned and how they are now maintained and managed.

If you would prefer to do this as a private tour then the walk is suitable for a half day tour.  It can also be combined with something else in central London to make a full day tour.

Email me for more details.